Clock apps might not be the most exciting apps available for smartphones, but they can be kind of important if you rely on them to set alarms to help you wake up in the morning or remember to do other things like take medication, leave for work, or make an important phone call.

But over the past week, a number of folks have found that alarms set using the Google Clock app aren’t ringing. There’s no word on how many folks have been late for work because of this, but there’s at least one thing you might want to try if you’ve been missing alarms: switch the alarm ringtone from a Spotify song or playlist to something else. 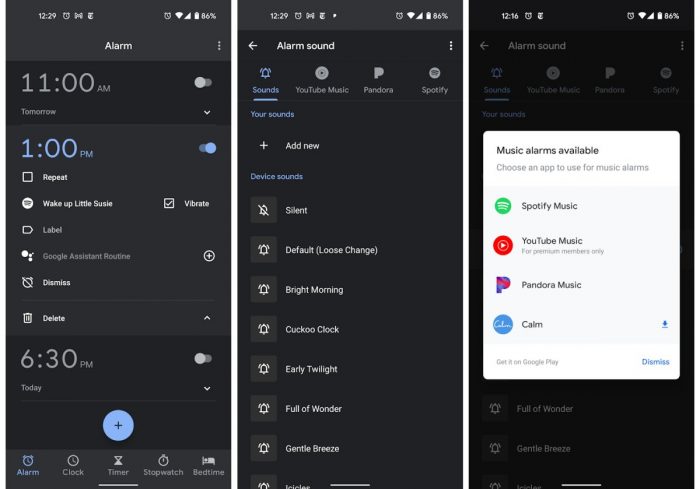 The issue seems to have started about a week ago, with many annoyed users posting 1-star reviews to the Google Clock listing in the Play Store. Some folks at reddit noticed that the issue may not affect all alarms though… just ones where users have used Spotify for an alarm sound. The issue has also been reported by users in the Spotify Community.

A Google representative says a fix is coming soon, but in the meantime, your best bet for making sure you can hear your alarm sounds is to stop using Spotify for alarms, at least temporarily. Or maybe use a third-party clock app.

Honestly, I must have missed the fact that you even could use Spotify for alarms – the company announced integration with the Google Clock app a few years ago, but it’s easy to miss if you haven’t bothered changing your alarm sound from the default, which is where you’d find options for using sounds from other supported apps installed on your device (my phone gives me the option to grab sounds from YouTube Music, Pandora, or Spotify).

For what it’s worth, I was unable to replicate the bug on my Pixel 4a 5G, even after setting a Google Clock alarm to play a song from Spotify and toggling Do Not Disturb mode.

Liliputing's primary sources of revenue are advertising and affiliate links (if you click the "Shop" button at the top of the page and buy something on Amazon, for example, we'll get a small commission).

But there are several ways you can support the site directly even if you're using an ad blocker* and hate online shopping.

Contribute to our Patreon campaign

* If you are using an ad blocker like uBlock Origin and seeing a pop-up message at the bottom of the screen, we have a guide that may help you disable it.

This site uses Akismet to reduce spam. Learn how your comment data is processed.

Disclosure: Some links on this page may be monetized by Skimlinks and Amazon's and eBay's affiliate programs.